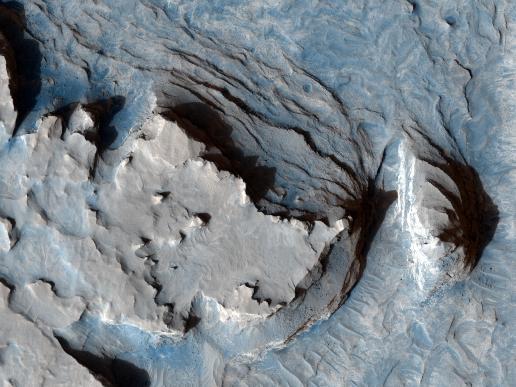 Originally released Aug. 1, 2007, this Mars Reconnaissance Orbiter image shows an ridge in Mars' Terra Meridiani that is most likely a former streambed, now exposed in inverted relief. The stream that formed this ridge must have been ancient as the ridge is buried by brighter rocks, which are themselves very old, having been thickly deposited and then heavily eroded. The Mars Exploration Rover Opportunity landed in the same region of Mars, and the rocks it has examined are likely part of a sequence similar to that exposed here. The rocks exposed at the Opportunity landing site are mostly wind-deposited sandstone, but show evidence of past water, reaching the surface at times. Opportunity has access to only a few meters of a stack of sediments that is hundreds of meters thick. Image Credit: NASA/JPL-Caltech/University of Arizona (More at NASA Picture Of The Day)