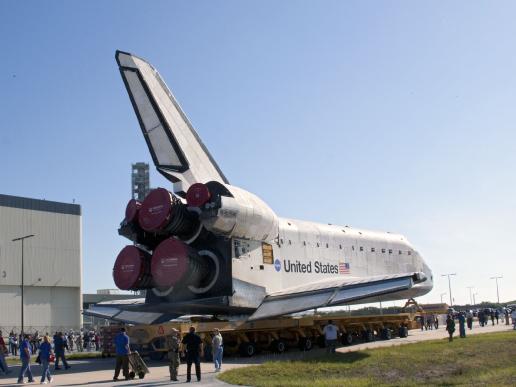 Shuttle Atlantis makes its final planned move from Orbiter Processing Facility-1 to the Vehicle Assembly Building at NASA's Kennedy Space Center in Florida. The move, called "rollover," is a major milestone in processing for the STS-135 mission to the International Space Station, targeted for early July. Inside the VAB, the shuttle will be attached to its external fuel tank and solid rocket boosters. Commander Chris Ferguson, Pilot Doug Hurley and Mission Specialists Sandra Magnus and Rex Walheim were on hand for the move. Photo credit: NASA/Jack Pfaller (More at NASA Picture Of The Day)