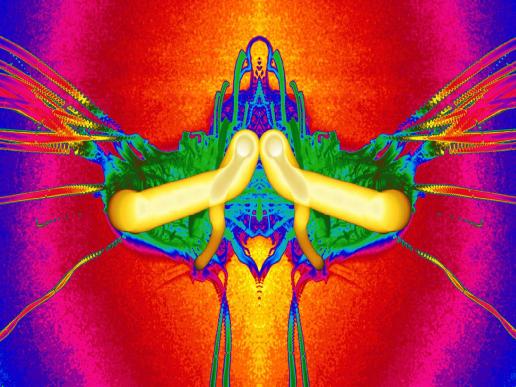 Because of the absence of gravity, fuels burning in space behave very differently than they do on Earth. In this image, a 3-millimeter diameter droplet of heptane fuel burns in microgravity, producing soot. When a bright, uniform backlight is placed behind the droplet and flame and recorded by a video camera, the soot appears as a dark cloud. Image processing techniques can then quantify the soot concentration at each point in the image. On the International Space Station, the Flame Extinguishing Experiment examines the combustion of such liquid fuel droplets. This colorized gray-scale image is a composite of the individual video frames of the backlit fuel droplet. The bright yellow structure in the middle is the path of the droplet, which becomes smaller as it burns. Initial soot structures (in green) tend to form near the liquid fuel. These come together into larger and larger particles which ultimately spiral out of the flame zone in long, twisting streamers. Image Credit: NASA (More at NASA Picture Of The Day)

They forgot to say that they MIRRORED the image

skwirlinator said:
They forgot to say that they MIRRORED the image
Click to expand...

It is, oh. Well it would make a great album cover or black light poster.

A
How to burn quicker in windows xp