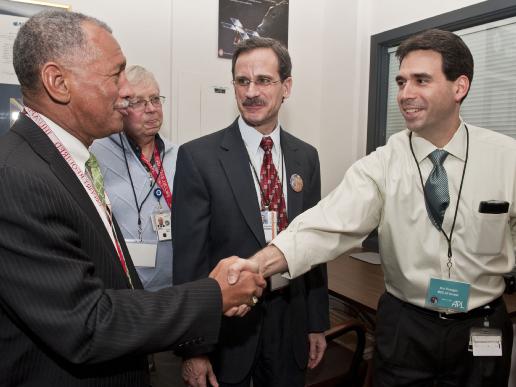 NASA Administrator Charles Bolden, left, shakes hands with Eric Finnegan, MESSENGER Mission Systems Engineer, right, as John Hopkins University Applied Physics Laboratory Director Dr. Ralph Semmel, second from right, and Ed Weiler, Associate Administrator for the Science Mission Directorate at NASA look on. The congratulations came after the spacecraft successfully inserted itself in Mercury's orbit, Thursday, March 17, 2011. MESSENGER, the first spacecraft to orbit Mercury, is carrying seven science instruments and is fortified against the blistering environs near the sun. The orbit insertion will place the spacecraft into a 12-hour orbit about Mercury with a 200 124 mile minimum altitude. MESSENGER will be 28.67 million miles from the sun and 96.35 million miles from Earth. Credit: NASA/Paul E. Alers (More at NASA Picture Of The Day) 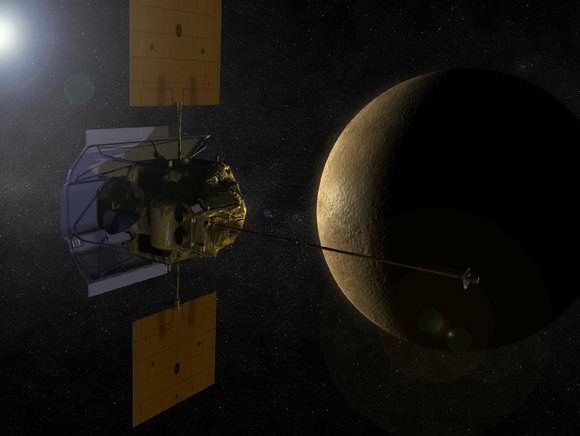 Artist's concept of MESSENGER in orbit around Mercury. Courtesy of NASA

After more than a dozen laps through the inner solar system, NASA’s MESSENGER spacecraft appears to have moved into orbit around Mercury tonight. Although Mariner in the 1970s and MESSENGER in the past several years have done flybys, MESSENGER is the first spacecraft to orbit the innermost planet in our solar system. NASA is stopping short of saying the spacecraft has achieved its planned orbit, but the clapping and hand-shaking in the control room looked highly optimistic.
“Preliminary results show that the burn went just as expected,” said a jubilant Ken Hibbard, an engineer at John Hopkins University’s Applied Physics Lab (APL), in a live report on NASA TV.
UPDATE, 9:50 p.m. EDT: NASA has abandoned all its cautionary language. MESSENGER is confirmed in orbit!

MESSENGER — which stands for MErcury Surface, Space ENvironment, GEochemistry and Ranging — launched Aug. 3, 2004 from Cape Canaveral. The orbit insertion places the spacecraft into a 12-hour orbit about Mercury with a 200 kilometer (124 mile) minimum altitude. The durable spacecraft is carrying seven science instruments and is fortified against the blistering environs near the sun.
The mission is an effort to study the geologic history, magnetic field, surface composition and other mysteries of the planet. The findings are expected to broaden our understanding of rocky planets, more and more of which are being discovered in other solar systems. One of the most compelling enigmas surrounds Mercury’s magnetic field. At a diameter only slightly larger than that of the moon (about 4,800 kilometers or 2,983 miles), Mercury should have solidified to the core. However, the presence of a magnetic field suggests to some researchers that the planet’s insides could be partially molten.
During its journey toward Mercury, MESSENGER passed the planet several times, filling in the imaging gaps left by Mariner 10. Now, the entire planet with the exception of about five percent has been observed. MESSENGER will focus its cameras on getting the best possible images of the remaining portions, mostly in the polar regions.
The MESSENGER mission is led by NASA, APL and the Carnegie Institution and includes a highly dedicated team of engineers, and many scientists.
“I’ve waited 36 years for this, and I’m about as excited as a person could get right now,” said Robert Strom, a MESSENGER team member from the University of Arizona’s Lunar and Planetary Lab.
Source: NASA’s MESSENGER mission website and NASA TV.