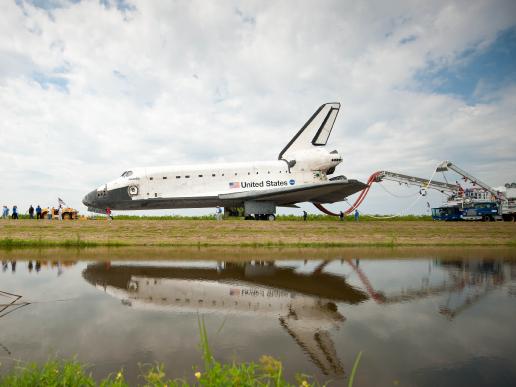 After completing the STS-135 mission, space shuttle Atlantis is rolled over to the Orbiter Processing Facility shortly after landing at NASA's Kennedy Space Center Shuttle Landing Facility. Atlantis and the STS-135 crew completed a 13-day mission to the International Space Station and the final flight of the Space Shuttle Program, early Thursday morning, July 21, 2011, in Cape Canaveral, Fla. Overall, Atlantis spent 307 days in space and traveled nearly 126 million miles during its 33 flights. Atlantis, the fourth orbiter built, launched on its first mission on Oct. 3, 1985. Image Credit: NASA/Bill Ingalls (More at NASA Picture Of The Day)