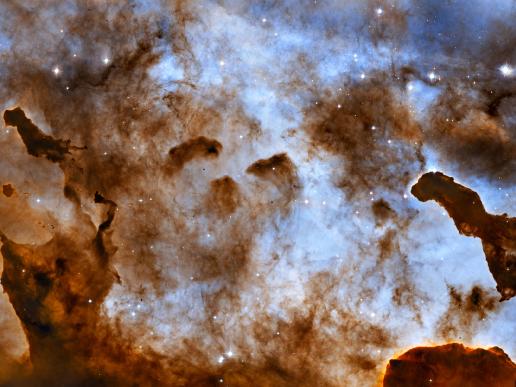 In the cold vacuum of space, radiation from massive stars carves away at cold molecular clouds, creating bizarre, fantasy-like structures. These pillars of cold hydrogen and dust, imaged by the Hubble Space Telescope, are located in the Carina Nebula. Violent stellar winds and powerful radiation from massive stars sculpt the surrounding nebula. This image of dust pillars in the Carina Nebula is a composite of 2005 observations taken of the region in hydrogen light (light emitted by hydrogen atoms) along with 2010 observations taken in oxygen light (light emitted by oxygen atoms), both times with Hubble's Advanced Camera for Surveys. The immense Carina Nebula is an estimated 7,500 light-years away in the southern constellation Carina. Image Credit: NASA, ESA, and the Hubble Heritage Project (STScI/AURA) (More at NASA Picture Of The Day)