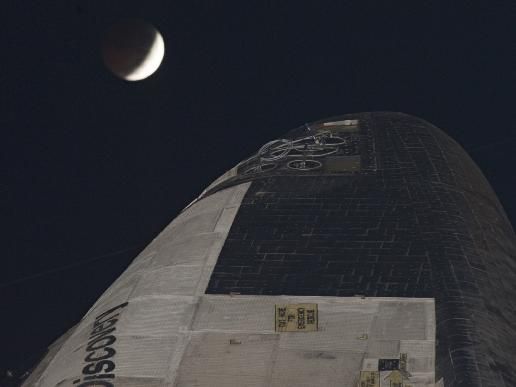 Space shuttle Discovery waits to roll back from Launch Pad 39A to the Vehicle Assembly Building (VAB) at NASA's Kennedy Space Center in Florida in the early morning hours of Dec 21, 2010, with the beginning of the total lunar eclipse clearly in view. Once inside the VAB, Discovery's external fuel tank will be examined and foam reapplied where 89 sensors were installed on the tank's aluminum skin for an instrumented tanking test on Dec. 17. The sensors were used to measure changes in the tank as super-cold propellants were pumped in and drained out. Data and analysis from the test will be used to determine what caused the tops of two, 21-foot-long support beams, called stringers, on the outside of the intertank to crack during fueling on Nov. 5. Discovery's next launch opportunity is no earlier than Feb. 3, 2011. Image Credit: NASA/Kim Shiflett (More at NASA Picture Of The Day)