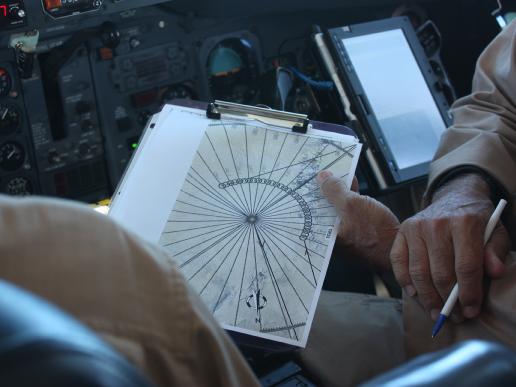 The DC-8 pilots on NASA's IceBridge mission point out the narrow Antarctic time zones on the navigation map. IceBridge, a six-year NASA mission, is the largest airborne survey of Earth's polar ice ever flown. It will yield a three-dimensional view of Arctic and Antarctic ice sheets, ice shelves and sea ice. These flights will provide a yearly, multi-instrument look at the behavior of the rapidly changing features of the Greenland and Antarctic ice. Data collected during IceBridge will help scientists bridge the gap in polar observations between NASA's Ice, Cloud and Land Elevation Satellite (ICESat) -- in orbit since 2003 -- and ICESat-2, planned for late 2015. ICESat stopped collecting science data in 2009, making IceBridge critical for ensuring a continuous series of observations. Image Credit: NASA/Sarah DeWitt (More at NASA Picture Of The Day)

A
Windows Scan Count Down Time

NASA Goes "Down Under"