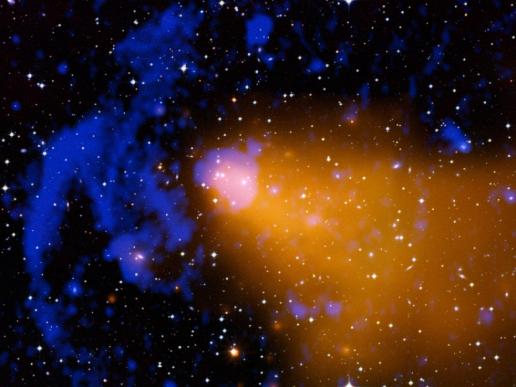 Two new studies have put Einstein's General Theory of Relativity to the test like never before, using observations of galaxy clusters to study the properties of gravity on cosmic scales. These results, made using data from NASA's Chandra X-ray Observatory, show Einstein's theory is still the best game in town. Such studies are crucial for understanding the evolution of the universe, both in the past and the future, and for probing the nature of dark energy, one of the biggest mysteries in science. This composite image of the Abell 3376 galaxy cluster shows X-ray data from the Chandra X-ray Observatory and the ROSAT telescope in gold, an optical image from the Digitized Sky Survey in red, green and blue, and a radio image from the VLA in blue. The bullet-like appearance of the X-ray data is caused by a merger, as material flows into the galaxy cluster from the right side. The giant radio arcs on the left side of the image may be caused by shock waves generated by this merger. Chandra observations of galaxy clusters have previously been used to show that dark energy has stifled the growth of these massive structures over the last 5 billion years and to provide independent evidence for the existence of dark energy by offering a different way to measure cosmic distances. Image Credit: X-ray (NASA/CXC/SAO/A. Vikhlinin; ROSAT), Optical (DSS), Radio (NSF/NRAO/VLA/IUCAA/J.Bagchi) (More at NASA Picture Of The Day)