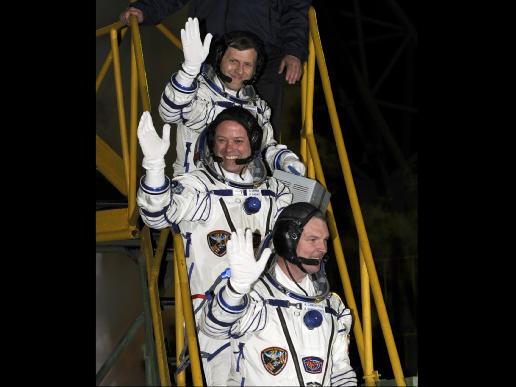 Expedition 27 crew members from top, Russian Flight Engineer Andrey Borisenko, NASA Flight Engineer Ron Garan, and Soyuz Commander Alexander Samokutyaev wave farewell from the bottom of the Soyuz rocket prior to their launch to the International Space Station from the Baikonur Cosmodrome in Baikonur, Kazakhstan, on Tuesday, April 5, 2011. The Soyuz, which has been dubbed "Gagarin," is launching one week shy of the 50th anniversary of the launch of Yuri Gagarin from the same launch pad in Baikonur on April 12, 1961, to become the first human to fly in space. Credit: NASA/Carla Cioffi (More at NASA Picture Of The Day)