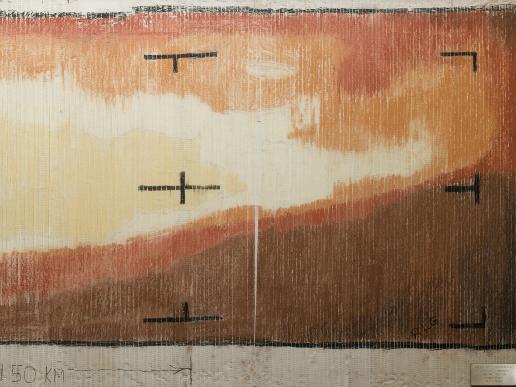 A 'real-time data translator' machine converted a Mariner 4 digital image data into numbers printed on strips of paper. Too anxious to wait for the official processed image, employees from the Voyager Telecommunications Section at NASA's Jet Propulsion Laboratory, attached these strips side by side to a display panel and hand colored the numbers like a paint-by-numbers picture. The completed image was framed and presented to JPL director, William H. Pickering. Mariner 4 was launched on November 28, 1964 and journeyed for 228 days to the Red Planet, providing the first close-range images of Mars. The spacecraft carried a television camera and six other science instruments to study the Martian atmosphere and surface. The 22 photographs taken by Mariner revealed the existence of lunar type craters upon a desert-like surface. After completing its mission, Mariner 4 continued past Mars to the far side of the Sun. On Dec. 20, 1967, all operations of the spacecraft were ended. Visit Catalog Page for PIA14033 for more information. Image Credit: NASA/JPL/Dan Goods (More at NASA Picture Of The Day)

Space Restored: First Image of the Earth from the Moon