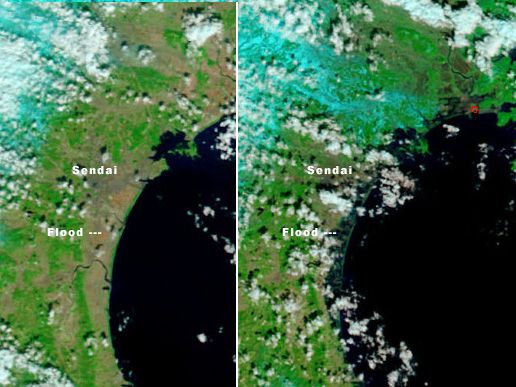 NASA’s Terra satellite's first view of northeastern Japan in the wake of a devastating earthquake and tsunami reveal extensive flooding along the coast. The Moderate Resolution Imaging Spectroradiometer (MODIS) acquired the right image of the Sendai region on March 12, 2011, at 10:30 a.m. The left image, taken by Terra MODIS on February 26, 2011, is provided as a point of reference. Water is black or dark blue in these images. It is difficult to see the coastline in the March 12 image, but a thin green line outlines the shore. This green line is higher-elevation land that is above water, presumably preventing the flood of water from returning to the sea. The flood indicator on the left image illustrates how far inland the flood extends. &rsaquo; View Full Resolution Feb. 26 (left) image &rsaquo; View Full Resolution March 11 (right) image Credit: NASA (More at NASA Picture Of The Day)

NASA: Japan's Coastline Before and After the Tsunami