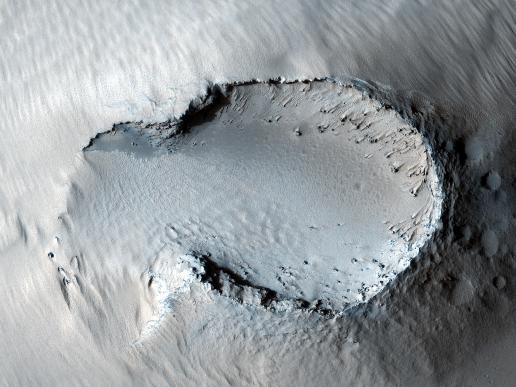 Originally released May 30, 2007, this image is centered on a small cone on the side of one of Mars' giant shield volcanoes. The cone shows some layers of hard rock but most of it is made of relatively soft material. This appears to be an example of a "cinder" cone composed of pieces of lava thrown into the air during a small volcanic eruption. Typically, such eruptions produce fountains of molten lava. Most of the lava would have cooled in this fountain, producing a loose pile of lava rocks. However, it appears that some pulses of the eruption allowed the lava to land without cooling much. These pieces were hot enough to weld together to make the hard layers seen today. The cone is about 2,300 x 3,600 feet, or 700 x 1,100 meters, in size, similar to many cinder cones on Earth. Image Credit: NASA/JPL-Caltech/University of Arizona (More at NASA Picture Of The Day)

Staff member
... or it is a Martian Stonehenge.