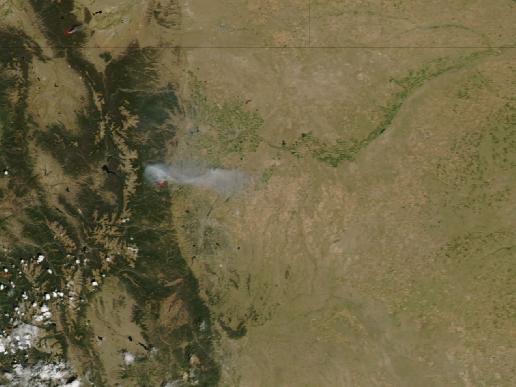 The Fourmile Canyon Fire continued to burn west of Boulder, Colo., in this image taken on Sept. 7, 2010, casting a long line of smoke to the east that was visible from NASA's Aqua satellite in its orbit around the Earth. MODIS, the Moderate Resolution Imaging Spectroradiometer, on NASA’s Aqua satellite captured this natural-color image of the fire at 2:40 p.m. local time (20:40 UTC) on Sept. 7. The red outline corresponds with the unusually high surface temperatures associated with an active fire. The thick smoke plume flows eastward. Over the plains northeast of Denver, the smoke plume casts a shadow to the north. By early morning on Sept. 8, thousands of people had abandoned their homes while the battle against the blaze continued. Image Credit: NASA/MODIS (More at NASA Picture Of The Day)