NASA: Galaxy at the Edge 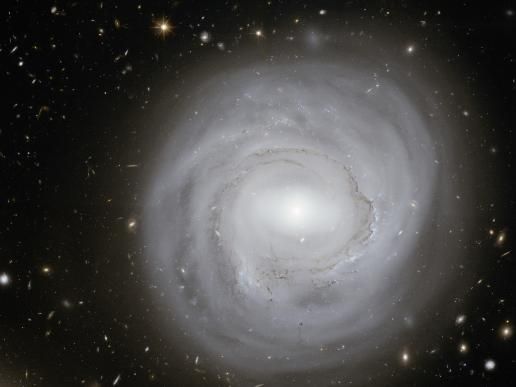 Spiral galaxy NGC 4921 presently is estimated to be 320 million light years distant. This image, taken by the Hubble Space Telescope, is being used to identify key stellar distance markers known as Cepheid variable stars. The magnificent spiral NGC 4921 has been informally dubbed anemic because of its low rate of star formation and low surface brightness. Visible in the image are, from the center, a bright nucleus, a bright central bar, a prominent ring of dark dust, blue clusters of recently formed stars, several smaller companion galaxies, unrelated galaxies in the far distant universe, and unrelated stars in our Milky Way Galaxy. Image Credit: NASA, ESA, K. Cook (LLNL) (More at NASA Picture Of The Day)