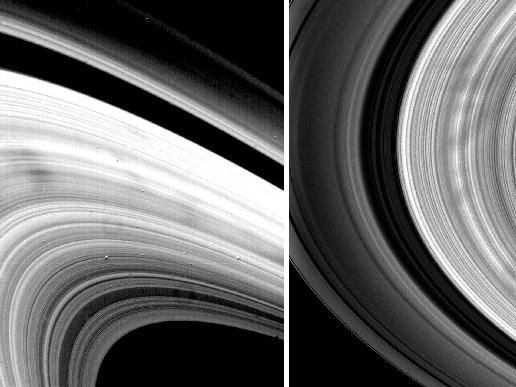 Scientists first saw these somewhat wedge-shaped, transient clouds of tiny particles known as "spokes" in images from NASA's Voyager spacecraft. They dubbed these features in Saturn's B ring "spokes" because they looked like bicycle spokes. An electrostatic charge, the way static electricity on Earth can raise the hair on your arms, appears to be levitating tiny ring particles above the ring plane, but scientists are still figuring out how the particles get that charge as they analyze images from NASA's Cassini spacecraft. The image on the left was obtained by Voyager 2 on Aug. 22, 1981. The image on the right was obtained by Cassini on Nov. 2, 2008. Image credit: NASA/JPL and NASA/JPL/SSI (More at NASA Picture Of The Day)