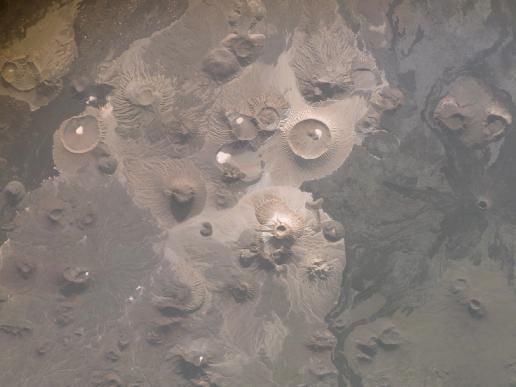 Harrat Khaybar, Saudi Arabia lies in the western half of the Arabian peninsula and contains not only large expanses of sand and gravel, but also extensive lava fields known as haraat (harrat for a named field). According to scientists, the volcanic field was formed by eruptions along a long north-south linear vent system over the past 5 million years; the most recent recorded eruption took place between 600-700 A.D. The presence of tuff cones -- formed by eruption of lava in the presence of water together with other volcanic features indicative of water -- in the Harrat Khaybar suggest that the local climate was much wetter during some periods of volcanic activity. Today, however, the regional climate is hyperarid -- little to no yearly precipitation -- leading to an almost total lack of vegetation. The image was taken by the Expedition 16 crew aboard the Inernational Space Station in March 2008. Image Credit: NASA (More at NASA Picture Of The Day)