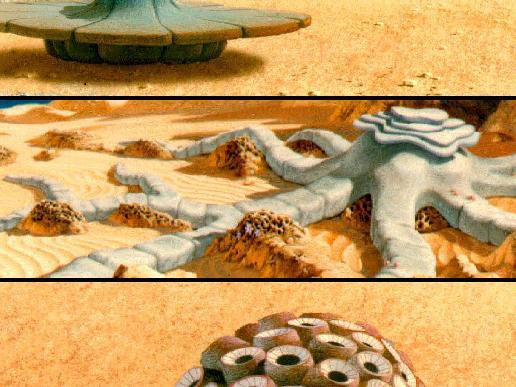 This composite of three artists' renderings from 1975 was only wish fulfillment for an unnamed JPL artist; however, the landscape and the rendered shapes took into account what was known about Mars that year. Compared to Earth, Mars is further away from the light of the sun, very cold and very arid, and had a thin atmosphere rich in carbon dioxide but little nitrogen, an environment distinctly inhospitable to complex, Earth-like, carbon-based life forms. "Life on Mars" was envisioned as low to the ground, symmetrical and simple. The artist drew silicon-based life forms, probably coached by others, perhaps scientists, who had thought about such possibilities. Peculiar saucer-like shapes stood only slightly above ground level, root-like structures reached outward for growth resources; a bundle of cones faced many directions for heat, light or food. Instead of reality, the images embodied the artist's hope and anticipation of what future Martian exploration would find. Image Credit: NASA/JPL (More at NASA Picture Of The Day)

M
Are you imaginative?