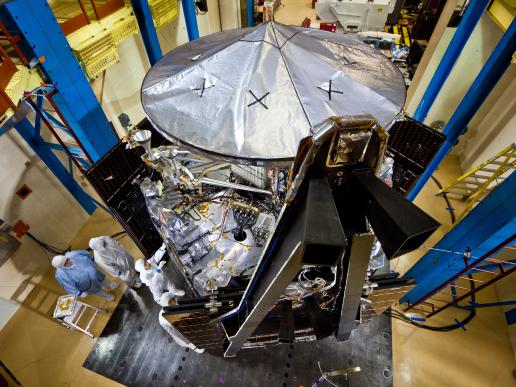 NASA's fully assembled Juno spacecraft is currently undergoing testing at Lockheed Martin Space Systems near Denver. Technicians are inspecting some of the spacecraft's components. All three solar array wings can be seen installed and stowed, and the spacecraft's large high-gain antenna in place on top. Juno is scheduled to ship from Lockheed Martin's facility to Kennedy Space Center in April, where it will undergo final preparations for launch in August 2011. The solar-powered spacecraft will orbit Jupiter's poles to find out more about the gas giant's origins, structure, atmosphere and magnetosphere. More information about Juno is online at NASA - Juno . Image credit: NASA/JPL-Caltech/LMSS (More at NASA Picture Of The Day)