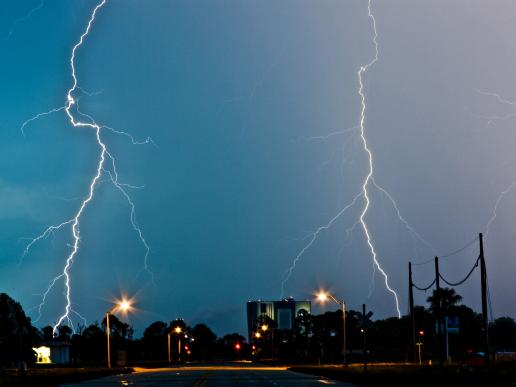 Lightning lights up the Vehicle Assembly Building at NASA's Kennedy Space Center in Florida during thunderstorms on Monday, Sept. 27, 2010. The Vehicle Assembly Building, or VAB, is one of the largest buildings in the world. Originally built for assembly of Apollo and Saturn vehicles, it was later modified to support space shuttle operations. High Bays 1 and 3 are used for integration and stacking of the complete Space Shuttle vehicle. High Bay 2 is used for external tank (ET) checkout and storage and as a contingency storage area for orbiters. High Bay 4 is also used for ET checkout and storage, as well as for payload canister operations and solid rocket boster contingency handling. Image Credit: Tom Moler (used by permission) (More at NASA Picture Of The Day)