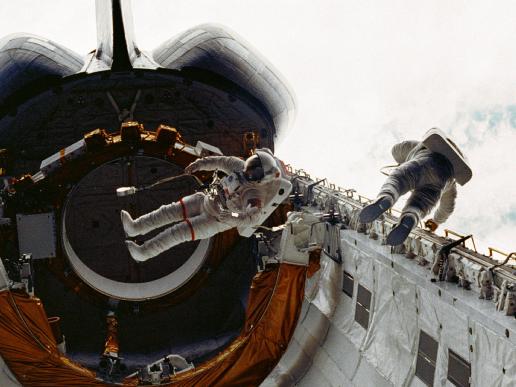 Astronauts Story Musgrave, left, and Don Peterson float in the cargo bay of the Earth-orbiting space shuttle Challenger during their April 7, 1983, spacewalk on the STS-6 mission. Their "floating" is restricted via tethers to safety slide wires. Thanks to the tether and slide wire combination, Peterson is able to translate, or move, along the port side hand rails. First called STA-099, Challenger was built to serve as a test vehicle for the Space Shuttle program. Challenger, the second orbiter to join NASA's Space Shuttle fleet, arrived at Kennedy Space Center in Florida in July 1982. Challenger launched on her maiden voyage, STS-6, on April 4, 1983 and saw the first spacewalk of the shuttle program, as well as the deployment of the first satellite--the Tracking and Data Relay System. The orbiter launched the first American woman, Sally Ride, into space on mission STS-7 and was the first to carry two U.S. female astronauts on mission STS-41-G. The first orbiter to launch and land at night on mission STS-8, Challenger also made the first Space Shuttle landing at Kennedy Space Center, concluding mission STS 41-B. Spacelabs 2 and 3 flew aboard the ship on missions STS 51-F and STS 51-B, as did the first German-dedicated Spacelab on STS 61-A. A host of scientific experiments and satellite deployments were performed during Challenger's missions. Challenger's service to America's space program ended in tragedy on Jan. 28, 1986. Just 73 seconds into mission STS-51L, a booster failure caused an explosion that resulted in the loss of seven astronauts, as well as the vehicle. Image Credit: NASA (More at NASA Picture Of The Day)