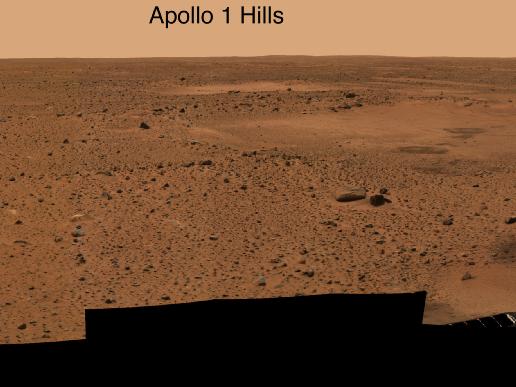 An image taken from the Mars Exploration Rover Spirit's PanCam at the spacecraft's landing site shows the nearby hills named after the crew of Apollo 1--Gus Grissom, Edward White and Roger Chaffee. The crew perished in flash fire during a launch pad test of the spacecraft at Kennedy Space Center on Jan. 27, 1967. "Grissom Hill" is located 4.7 miles to the southwest of the rover Spirit's landing site. "White Hill" is 7 miles to the northwest and "Chaffee Hill" is 8.9 miles to the south-southwest. Image Credit: NASA (More at NASA Picture Of The Day)