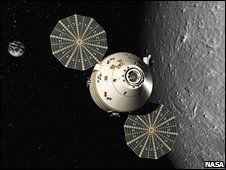 Nasa has pushed back by a year its internal target date for flying the successor to the shuttle.
Agency officials say they are now aiming for September 2014 for the first crewed mission of the Orion ship.
This is a year later than Nasa had hoped for, but still inside its March 2015 absolute deadline.
The officials say the funds currently available to develop Orion and its Ares launch rocket mean the faster timeline is no longer tenable.
Engineers also need time to grapple with a range of technical issues as they develop the new systems.
In July, the US space agency fixed the dates of its last shuttle flights.
The final orbiter to launch before the whole fleet goes into retirement will be Endeavour on 31 May, 2010.

Remaining missions in 2008
8 October - Atlantis: A mission to repair and upgrade the Hubble Space Telescope.
10 November - Endeavour: ISS re-supply, and servicing of rotary joints that allow the big solar arrays to track the Sun.
Missions in 2009
12 February - Discovery: Final pair of solar arrays to be installed on the starboard end of the station's backbone.
15 May - Endeavour: Delivery of third and final component of the Japanese Kibo Laboratory.
30 July - Atlantis: Largely a logistics mission but it will include spacewalks to install equipment on Europe's Columbus lab.
15 October - Discovery: The flight will take up two spare gyroscopes that are needed to maintain station stability.
10 December - Endeavour: Delivery of the final connecting node, Node 3, together with the European-built Cupola window.
Missions in 2010
11 February - Atlantis: Another logistics mission to make sure the station is fully stocked with supplies.
8 April - Discovery: The flight will see the installation of a Russian Mini Research Module to be attached at the rear of the ISS.
31 May - Endeavour: The last flight. The 15-day mission will be the 35th orbiter flight to the station.