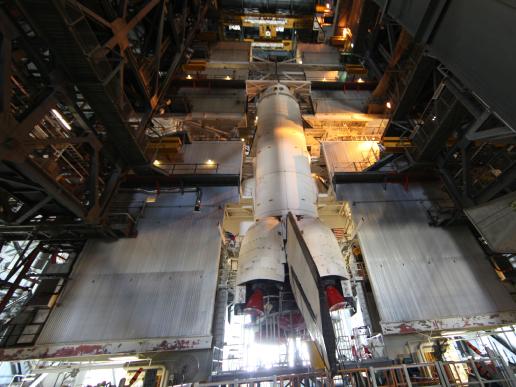 In preparation for its last planned mission to the International Space Station, shuttle Discovery was lowered onto its external fuel tank and solid rocket boosters in High Bay 3 of the Vehicle Assembly Building at NASA's Kennedy Space Center in Florida. The lift and mate operation began Sept. 9 and wrapped up early Sept. 10. On Sept. 21, 2010, Discovery completed its last planned trip to the launch pad at 1:49 a.m., leaving the Vehicle Assembly Building at about 7:23 p.m. on the slow, 3.4-mile crawl to the pad. Discovery, the oldest of NASA's three active orbiters, first launched Aug. 30, 1984, on STS-41D and is being readied for the STS-133 mission to station. Liftoff is targeted for Nov. 1 at 4:40 p.m. EDT. Image Credit: NASA/Jack Pfaller (More at NASA Picture Of The Day)