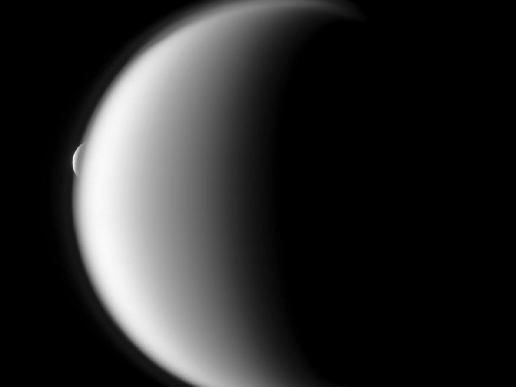 Rhea emerges ... After being occulted by the larger moon Titan. Occultation is a celestial event in which a larger body covers up a distant object. Observations such as this one, in which one moon passes close to or in front of another, help scientists refine their understanding of the orbits of Saturn's moons. Titan is about 621,000 miles (1 million kilometers) from Cassini in this image. Rhea is about 1.4 million miles (2.3 million kilometers) from Cassini. The image was taken in visible light with the Cassini spacecraft narrow-angle camera on Oct. 27, 2009. Image scale is 4 miles (6 kilometers) per pixel on Titan and 9 miles (14 kilometers) per pixel on Rhea. Image Credit: NASA/JPL/Space Science Institute (More at NASA Picture Of The Day)
Share:
Facebook Twitter Reddit Pinterest Tumblr WhatsApp Email Share Link
Top