NASA: Rings Around a Crescent 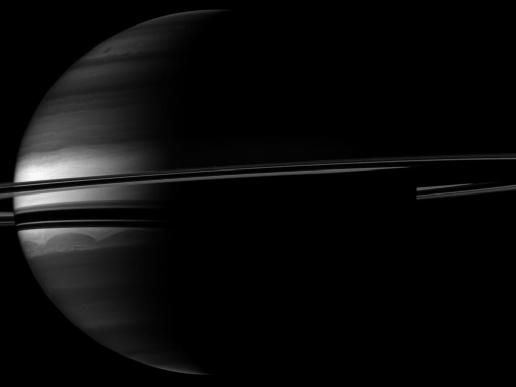 A crescent Saturn appears nestled within encircling rings in this Cassini spacecraft image. Clouds swirl through the atmosphere of the planet and a barely visible Prometheus orbits between the planet's main rings and its the thin F ring. Saturn's moon Prometheus appears as a speck above the rings near the middle of the image. This view looks toward the southern, unilluminated side of the rings from about 3 degrees below the ringplane. The image was taken with the Cassini spacecraft's wide-angle camera on Sept. 14, 2010, and was obtained at a distance of approximately 1.6 million miles, or 2.6 million kilometers, from Saturn and at a sun-Saturn-spacecraft, or phase, angle of 100 degrees. Image Credit: NASA/JPL/Space Science Institute (More at NASA Picture Of The Day)

Ring Around a Star