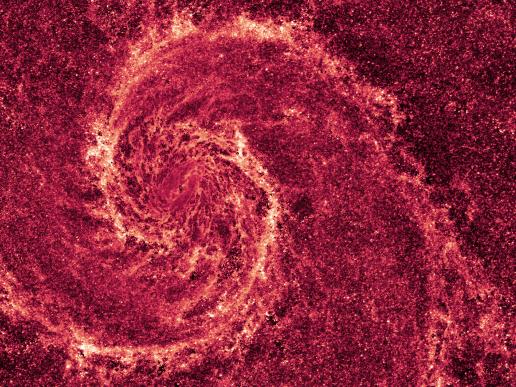 This image by the Hubble Space Telescope shows a dramatic view of the spiral galaxy M51, dubbed the Whirlpool Galaxy. Seen in near-infrared light, most of the starlight has been removed, revealing the Whirlpool's skeletal dust structure. This new image is the sharpest view of the dense dust in M51. The narrow lanes of dust revealed by Hubble reflect the galaxy's moniker, the Whirlpool Galaxy, as if they were swirling toward the galaxy's core. Image Credit: NASA, ESA, M. Regan and B. Whitmore (STScI), R. Chandar (University of Toledo), S. Beckwith (STScI), and the Hubble Heritage Team (STScI/AURA) (More at NASA Picture Of The Day)