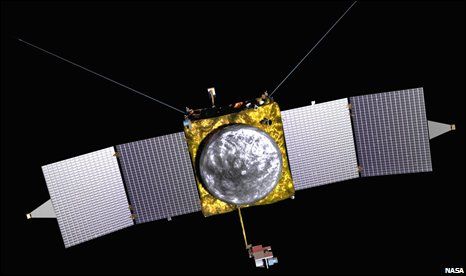 The US space agency (Nasa) has approved its next orbiter mission to Mars.
The Maven spacecraft will arrive at the Red Planet in late 2014, to study the atmosphere and climate history of Earth's near neighbour.

The satellite will be equipped with eight scientific instruments and will fly low enough on occasions to sample the upper layers of Martian "air".
It could also provide a communications link to Earth for surface robots, such as Europe's ExoMars rover.

The cost of the Mars Atmosphere and Volatile EvolutioN (Maven) mission has been put at $485m.

Atmosphere loss
It is what Nasa terms a "Scout mission" - a moderate-cost venture that is designed to supplement other more expensive and higher-spec missions.
It was chosen from a list of 20 proposals submitted to Nasa management in 2006; and beat a similar mission suggestion known as Great Escape in the final round of selection.

The planet seen today is very different from the one scientists know existed billions of years ago.

Mars once had a denser atmosphere that supported the presence of liquid water on the surface. As part of a dramatic change in climate most of this atmosphere has been lost.

Maven will make definitive scientific measurements of present-day atmospheric loss that will offer clues about the planet's history.
"The loss of Mars' atmosphere has been an ongoing mystery," McCuistion said. "Maven will help us solve it."

Heavy rovers
Nasa currently has two spacecraft in orbit around Mars - the Mars Reconnaissance Orbiter and the Mars Odyssey spacecraft.These craft are taking detailed pictures and studying the geochemistry of the Red Planet.

Ground operations are conducted by the two ageing rovers, Opportunity and Spirit; and by the recently arrived Phoenix static lander.Phoenix also is classed as a Scout mission. 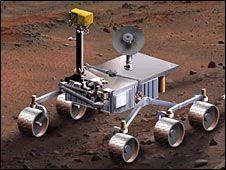 Already approved and in preparation is the next lander - the Mars Science Laboratory.The robotic vehicle will be equipped with a payload of science instruments more than 10 times as massive as those of any previous Mars rover.

MSL will assess whether its landing zone ever had or still has environmental conditions favourable to microbial life.

It will be followed by Europe's ExoMars rover which will arrive at the Red Planet at about the same time as Maven.If the European vehicle needs to relay communications through an orbiting spacecraft then Maven will be equipped to handle the link.

Nasa is funding development work on two organic chemistry instruments that could be part of ExoMars' scientific payload. The European robot will search its landing site for signs of past or present life.
Click to expand...