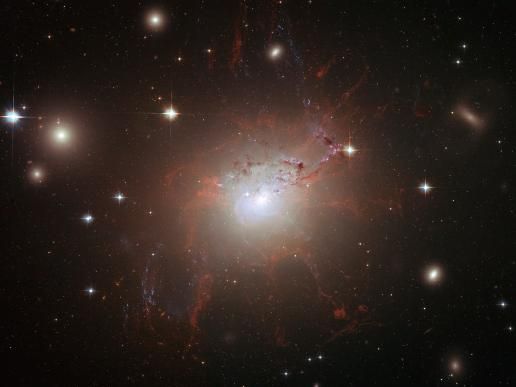 This Hubble Space Telescope image of galaxy NGC 1275 reveals the fine, thread-like filamentary structures in the gas surrounding the galaxy. The red filaments are composed of cool gas being suspended by a magnetic field, and are surrounded by the 100-million-degree Fahrenheit hot gas in the center of the Perseus galaxy cluster. The filaments are dramatic markers of the feedback process through which energy is transferred from the central massive black hole to the surrounding gas. The filaments originate when cool gas is transported from the center of the galaxy by radio bubbles that rise in the hot interstellar gas. At a distance of 230 million light-years, NGC 1275 is one of the closest giant elliptical galaxies and lies at the center of the Perseus cluster of galaxies. The galaxy was photographed in July and August 2006 with Hubble's Advanced Camera for Surveys. Image Credit: NASA, ESA, and the Hubble Heritage (STScI/AURA)-ESA/Hubble Collaboration; Acknowledgment: A. Fabian (Institute of Astronomy, University of Cambridge, UK) (More at NASA Picture Of The Day)