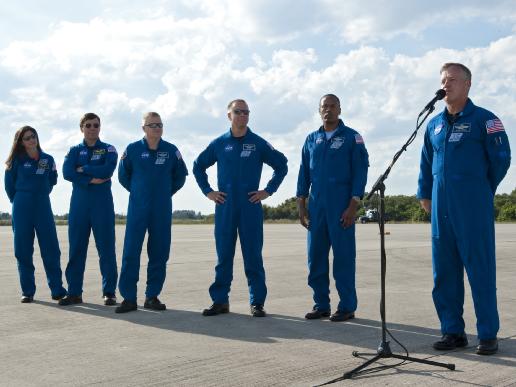 At NASA's Kennedy Space Center in Florida, STS-133 Commander Steve Lindsey speaks to the media gathered at the Shuttle Landing Facility. From left are Nicole Stott, Michael Barratt, Eric Boe, Tim Kopra and Alvin Drew. The crew is gathered for a practice launch dress rehearsal called the Terminal Countdown Demonstration Test (TCDT) in preparation for the upcoming mission. TCDT provides each shuttle crew and launch team with an opportunity to participate in various simulated countdown activities, including equipment familiarization and emergency training. Space shuttle Discovery and its STS-133 crew will deliver the Permanent Multipurpose Module, packed with supplies and critical spare parts, as well as Robonaut 2, the dexterous humanoid astronaut helper, to the International Space Station. Launch is targeted for Nov. 1 at 4:40 p.m. Image Credit: NASA/Kim Shiflett (More at NASA Picture Of The Day)