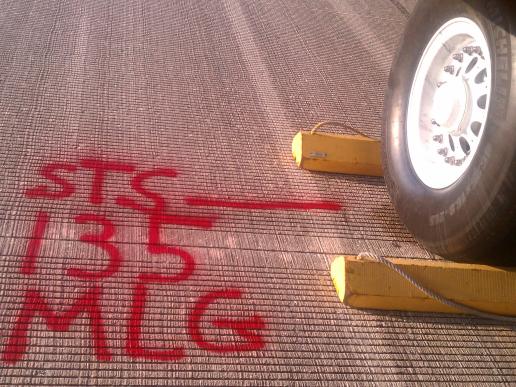 Workers measured and marked in bright red the letters "MLG" at the spot where space shuttle Atlantis' main landing gear came to rest after the vehicle's final return from space. Securing the space shuttle fleet's place in history on the STS-135 mission, Atlantis safely and successfully rounded out NASA's Space Shuttle Program on the Shuttle Landing Facility's Runway 15 at Kennedy Space Center in Florida. Main gear touchdown was at 5:57:00 a.m. EDT, followed by nose gear touchdown at 5:57:20 a.m., and wheelstop at 5:57:54 a.m. On the 37th shuttle mission to the International Space Station, STS-135 delivered more than 9,400 pounds of spare parts, equipment and supplies in the Raffaello multi-purpose logistics module that will sustain station operations for the next year. STS-135 was the 33rd and final flight for Atlantis, which has spent 307 days in space, orbited Earth 4,848 times and traveled 125,935,769 miles. Image Credit: NASA/Kyle Herring (More at NASA Picture Of The Day)

what an amazing piece-of-history, that pic _ wow

NASA: Endeavour on the Pad