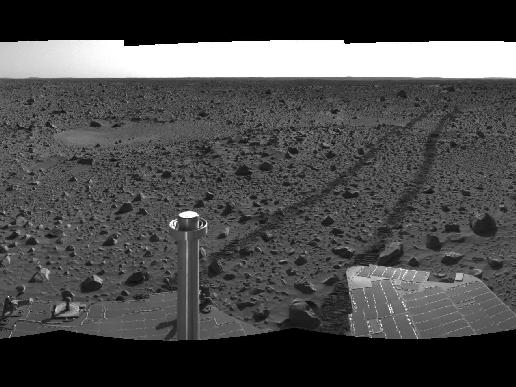 On Jan. 4, 2004, Spirit--the first of two NASA Mars Exploration Rovers--landed on the Red Planet for what was to be a 90-day mission. This image, acquired on sol 127 (May 12, 2004), shows the path the rover traveled on its way to the base of the "Columbia Hills." The hills can be seen silhouetted against the horizon on the far left side . Since sol 2210 (March 22, 2010), Spirit has been silent, and the project's scientists continue to listen for Spirit with the Deep Space Network and Mars Odyssey orbiter. The project is also conducting a paging technique called "Sweep & Beep" to stimulate the rover. Since the period of peak solar activity occurs in mid-March 2011, leaving Spirit plenty of occasion to respond. Spirit's sister spacecraft Opportunity continues to explore Mars, arriving in December 2010 at the 80-meter (262-foot) diameter Santa Maria crater on its journey to Endeavour crater. Image Credit: NASA (More at NASA Picture Of The Day)