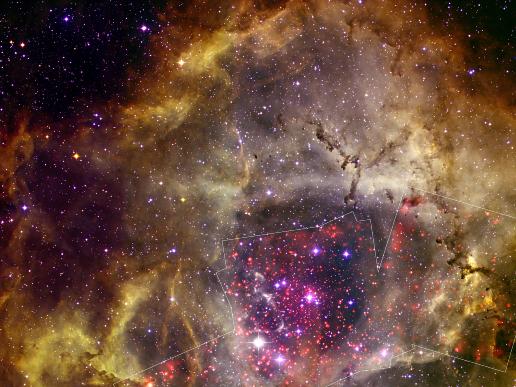 Located about 5,000 light years from Earth, this composite image shows the Rosette star formation region. Data from the Chandra X-ray Observatory are colored red and outlined by a white line. The X-rays reveal hundreds of young stars in the central cluster and fainter clusters on either side. Optical data from the Digitized Sky Survey and the Kitt Peak National Observatory (purple, orange, green and blue) show large areas of gas and dust, including giant pillars that remain behind after intense radiation from massive stars has eroded the more diffuse gas. A recent Chandra study of the cluster on the right side of the image, named NGC 2237, provides the first probe of the low-mass stars in this satellite cluster. Previously only 36 young stars had been discovered in NGC 2237, but the Chandra work has increased this sample to about 160 stars. The presence of several X-ray emitting stars around the pillars and the detection of an outflow -- commonly associated with very young stars -- originating from a dark area of the optical image indicates that star formation is continuing in NGC 2237. By combining these results with earlier studies, scientists conclude that the central cluster formed first, followed by expansion of the nebula, which triggered the formation of the two neighboring clusters, including NGC 2237. Image Credit: X-ray (NASA/CXC/SAO/J. Wang et al), Optical (DSS & NOAO/AURA/NSF/KPNO 0.9-m/T. Rector et al) (More at NASA Picture Of The Day)

NASA: A Nebula by Any Other Name