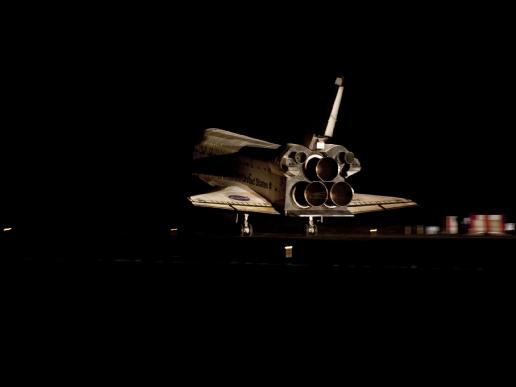 Space shuttle Atlantis' bright-white, iconic frame illuminates the darkness as it touches down on the Shuttle Landing Facility's Runway 15 at NASA's Kennedy Space Center in Florida for the final time. Securing the space shuttle fleet's place in history, Atlantis marked the 26th nighttime landing of NASA's Space Shuttle Program and the 78th landing at Kennedy. Main gear touchdown was at 5:57:00 a.m. EDT, followed by nose gear touchdown at 5:57:20 a.m., and wheelstop at 5:57:54 a.m. On board are STS-135 Commander Chris Ferguson, Pilot Doug Hurley, and Mission Specialists Sandra Magnus and Rex Walheim. On the 37th shuttle mission to the International Space Station, STS-135 delivered more than 9,400 pounds of spare parts, equipment and supplies in the Raffaello multi-purpose logistics module that will sustain station operations for the next year. STS-135 was the 33rd and final flight for Atlantis, which has spent 307 days in space, orbited Earth 4,848 times and traveled 125,935,769 miles. Image Credit: NASA/Kim Shiflett (More at NASA Picture Of The Day)
Share:
Facebook Twitter Reddit Pinterest Tumblr WhatsApp Email Share Link
Top