NASA: Through the Looking Glass 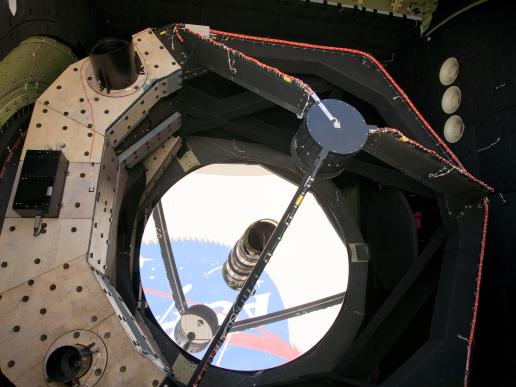 The NASA logo on Bldg. 703 at the Dryden Aircraft Operations Facility in Palmdale, Calif., is reflected in the 2.5-meter primary mirror of the SOFIA observatory's telescope. SOFIA--the Stratospheric Observatory for Infrared Astronomy-- is an airborne observatory, built to complement the Hubble, Spitzer and Herschel space telescopes, as well as major Earth-based telescopes. SOFIA features a German-built 100-inch (2.5 meter) diameter far-infrared telescope weighing 20 tons mounted in the rear fuselage of a modified Boeing 747SP aircraft. It is one of the premier space science programs of NASA's Science Mission Directorate. SOFIA is a joint program between NASA and the German Aerospace Center. Image Credit: NASA/Tom Tschida (More at NASA Picture Of The Day)

Space Into the Looking Glass