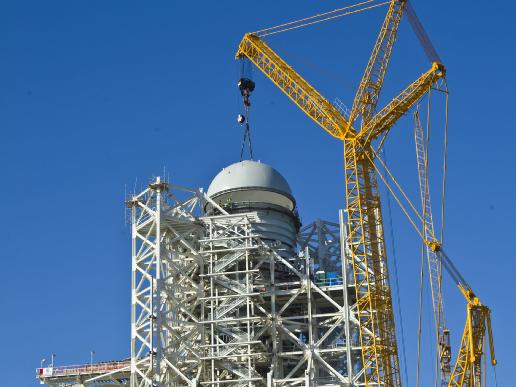 With the placement of the test cell dome atop NASA's new A-3 Test Stand at the John C. Stennis Space Center, the project met another milestone on April 13, 2011. Placement of the dome also is known as 'topping out.' NASA broke ground in 2007 for the new stand, which is being built to provide simulated high-altitude testing for next-generation rocket engines that will carry humans into deep space. The stand will use a series of chemical steam generators to create a vacuum that allows operators to test full-scale engines at simulated altitudes up to 100,000 feet. The A-3 stand is the first large test structure to be built at Stennis since the facility was established to test the Saturn V rocket stages that helped carry Apollo astronauts to the moon and is scheduled for activation in 2013. Image Credit: NASA/Danny Nowlin (More at NASA Picture Of The Day)

NASA: The View from Up Top

NASA: From the Inside Out

NASA to announce proof of life out there?