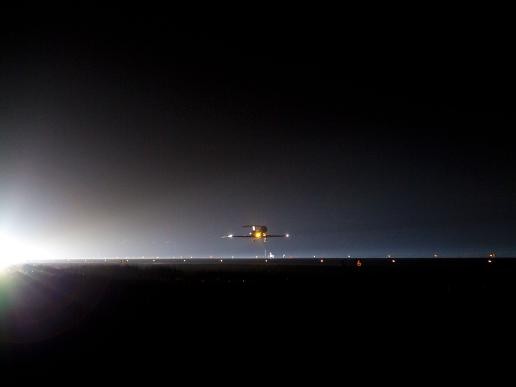 On July 5, STS-135 Commander Chris Ferguson and pilot Doug Hurley perform touch-and-go landings aboard a Shuttle Training Aircraft at the Shuttle Landing Facility at NASA's Kennedy Space Center in Florida. The craft is a Gulfstream II jet that was modified to mimic the shuttle's handling during the final phase of landing. These practice landings are a part of standard training procedures. Atlantis and its crew are scheduled to lift off at 11:26 a.m. EDT on July 8 to deliver the Raffaello multi-purpose logistics module packed with supplies and spare parts to the station. STS-135 will be the 33rd flight of Atlantis, the 37th shuttle mission to the space station, and the 135th and final mission of NASA's Space Shuttle Program. Image Credit: NASA/Cory Huston (More at NASA Picture Of The Day)