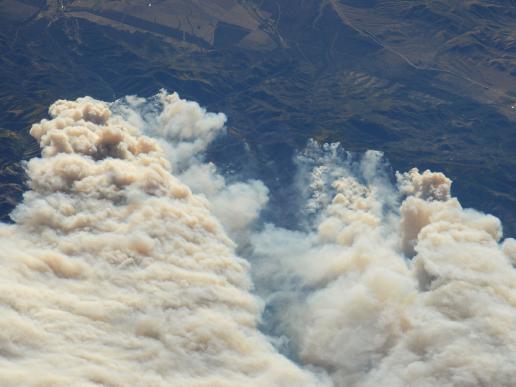 The Expedition 24 crew aboard the International Space Station photographed the Twitchell Canyon Fire in central Utah on Sept. 20. The fire near central Utah’s Fishlake National Forest is reported to cover an area of approximately 13,383 hectares, or 33,071 acres. This detailed image shows smoke plumes generated by several fire spots close to the southwestern edge of the burned area. The fire was started by a lightning strike on July 20, 2010. Whereas many of the space station images of Earth look straight down (nadir), this photograph was exposed at an angle. The station was located over a point approximately 316 miles to the northeast, near the Colorado/Wyoming border, at the time the image was taken. Southwesterly winds continue to extend smoke plumes from the fire to the northeast. Image Credit: NASA (More at NASA Picture Of The Day)