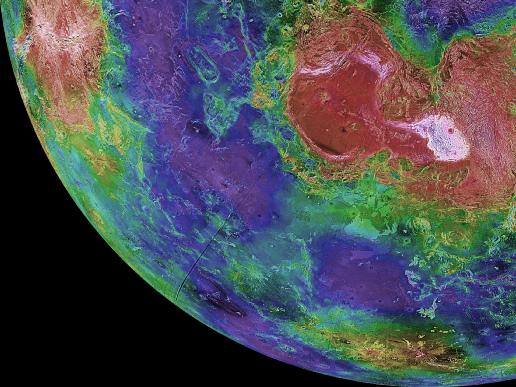 This hemispheric view of Venus was created using more than a decade of radar investigations culminating in the 1990-1994 Magellan mission, and is centered on the planet's North Pole. The Magellan spacecraft imaged more than 98 percent of the planet Venus and a mosaic of the Magellan images (most with illumination from the west) forms the image base. Gaps in the Magellan coverage were filled with images from the Earth-based Arecibo radar in a region centered roughly on 0 degree latitude and longitude, and with a neutral tone elsewhere (primarily near the south pole). This composite image was processed to improve contrast and to emphasize small features, and was color-coded to represent elevation. Gaps in the elevation data from the Magellan radar altimeter were filled with altimetry from the Venera spacecraft and the Pioneer Venus missions. Image Credit: NASA/JPL/USGS (More at NASA Picture Of The Day)