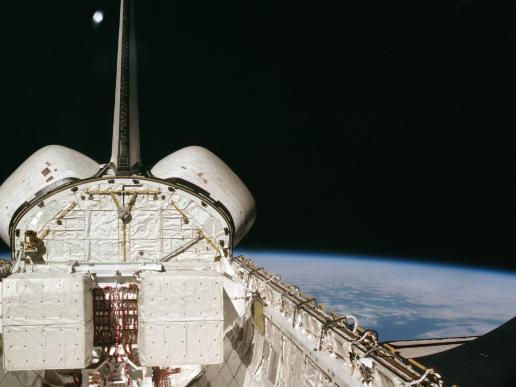 On the craft's maiden voyage, the crew of space shuttle Columbia took this image that showcases the blackness of space and a blue and white Earth, as well as the cargo bay and aft section of the shuttle. The image was photographed through the flight deck's aft windows. In the lower right corner is one of the vehicle's radiator panels. The pentagon-shaped object in the upper left is glare caused by window reflection. STS-1, Columbia's maiden voyage, launched on April 12, 1981, and was the inaugural flight in the Space Shuttle Program. Columbia and its crew were lost during STS-107 mission in 2003. As the shuttle lifted off from Kennedy Space Center on Jan. 16, a small portion of foam broke away from the external fuel tank and struck the orbiter's left wing. The resulting damage created a hole in the wing's leading edge, which caused the vehicle to break apart during reentry on Feb. 1. Image Credit: NASA (More at NASA Picture Of The Day)