NASA: What a Ride It's Been 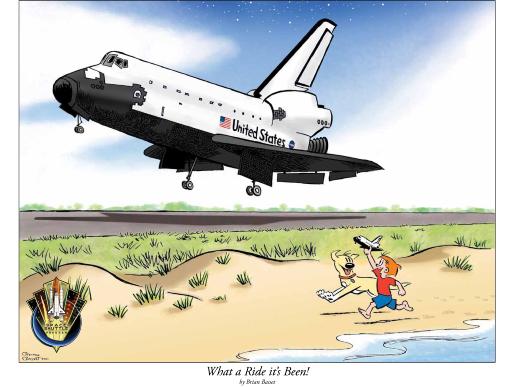 As a tribute to NASA's Space Shuttle Program, artist Brian Basset created this commemorative drawing depicting his characters, Red and Rover, racing alongside the space shuttle as it lands for the final time later this year. In 2004, Basset was honored with a one-man show of his space-themed comic strips at NASA Headquarters in Washington, D.C. On July 26, 2005, an original drawing by Basset commemorating America's return to flight launched aboard shuttle Discovery on the STS-114 mission. Basset created the strip in 2000 about a boy and his dog, who dream of one day going into space. Twice nominated by the National Cartoonists Society for Best Comic Strip of the Year in 2003 and 2010, Red and Rover appears in more than 160 newspapers worldwide and is syndicated by Universal Uclick. Previously, Basset worked as an editorial cartoonist for The Seattle Times. View Red and Rover as a PDF. Image Credit: Brian Basset (used by the author's permission) (More at NASA Picture Of The Day)

Hubble in Trouble, But It Could Have Been Double