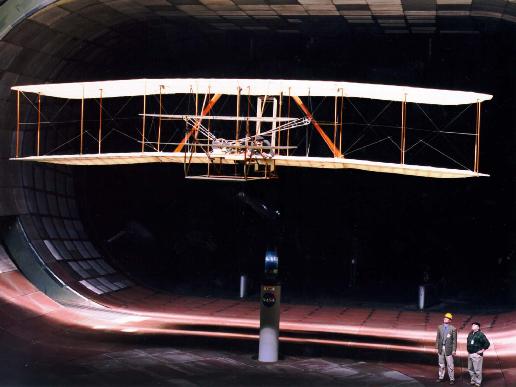 On Dec. 17, 1903, the Wright Brothers made the first powered flight and, in March 1999, a full-scale replica of the 1903 Wright Flyer was mounted in NASA Ames Research Center's 40-foot by 80-foot wind tunnel for tests to build a historically accurate aerodynamic database of the Flyer. For two weeks, engineers studied the replica's stability, control and handling at speeds up to 27 knots (30 mph) in the wind tunnel. The Wright Flyer replica was constructed by a team of volunteers from the American Institute of Aeronautics and Astronautics using plans provided by the Smithsonian. The replica featured a 40-foot-4-inch wingspan reinforced with piano wire, cotton wing coverings, spruce propellers and a double rudder. Although it replicated the 1903 Wright Flyer in design, size, appearance and aerodynamics, some changes were made to make it stronger for mounting in the wind tunnel. Image Credit: NASA (More at NASA Picture Of The Day)

Staff member
I wonder what the results of the testing were. I'd imagine the characteristics behaved were akin to what we would call an ultralight in today's world.