Need help with a story device

I found a wiki article named Faster-than-light travel in fiction while looking for research for a short story I am writing. There are many references to FTL travel in Science Fiction but my favorite has to be one that is not mentioned. Thought. To travel at the speed of thought has no range except for that of your own imagination. There are no limits, just think of a destination and bang, you are there.
Here are some examples of FTL that are given at wiki. Which one or ones are you partial too and why?

Which is your favorite mode of transport? Which one is the most believable or the least distracting to the story? Why?

In my story I am looking to explore the various super-clusters that compose the rest of the universe. The distances are so great it would take a warp drive millions if not hundreds of millions of years to get to even one. Folding space might be a possibility but that would require extremely high and complicated technology and energy.

To give you an idea of the distances here is a nice site that looks at super-clusters called the Atlas of the Universe. The link takes you to the Super-cluster image
The Universe within 1 billion Light Years - The Neighbouring Superclusters

BTW, the drive will need to be interuniverse not interstellar or intergalactic.

As for the mechanics of the ThoughtDrive, I am thinking of using a device where a person (the navigator) hooks his brain up to a AI Singularity (the engine) and nanoassemblers build a ship around the crew which is then thought-ported to its destination.

Time on Earth passes at the same rate as the time for the Navigator. If the navigator experiences 1 hr while away, and returns then only 1 hr will have lapsed on Earth.

To the casual observer the mass of the navigator, crew, AI Singularity and ship wink out of existence. Upon return, any matter in the field where the travelers reemerge is displaced away. A chair in the way would just move out of the field. Likewise, if emerging in earth or water the substrate would move away creating a void that would be filled by the matter of the travelers. They could then jump to a safer destination. If jumping into the air, the navigator would just rejump for a safe landing.

Interesting find. Thanks for sharing!

Sorry to say but I don't know of any other concepts, fictional or non that are out there.

The Stars My Destination - Wikipedia

Just a quick note, think in the US “The Start my Destination” was called “Tiger! Tiger!”

Jaunting might not work directly into what you want due to the fact that it required the Jaunter to first be in the place for later Jaunting (but is, its fictional, right?).
Most stories that use teleportation (be it short or long distances), require the person to first visualize the place he/she/it wants to teleport to (I am remembering the Dragons of Pern by Anne McCaffrey, that could move themselves, their riders and objects they were holding). Strangely, I never found a story that used remote-seeing to provide that visualization for teleport purposes.

As to other thoughts of transportation in FTL, I believe DUNE had some ideas on that. The Navigators guild (the guys that used the spice) where plugged into the ships to allow FTL navigation. I don’t think they actually did the moving, but they were part of the navigation process, due to be able to see partial futures.

Having been to a place and memorising the spot has some weight compared to 'blind' teleportation. Since galaxies are spinning round, solar systems are spinning inside, and planets rotate themselves, I'd guess knowing the location you were teleporting to would be extremely beneficial!

That said, if someone changes that location, ie. brings a digger in and makes a big hole, landscaping, or puts a building in place, I can imagine it won't go down too well for the jumper.

That leads to inbuilt safety. If the location you are going to jump to, it's molecules, is too far different from what you "remember" then you can't physically jump?

I suppose, jumping without having been there "may" work if you have a direct video feed of the place for safety. But still, the calculations for the spinning galaxies/systems/planets................

This is why I personally lean towards ships, in space where there is hardly any matter, enclosed in an energy/force bubble, folding space and popping out somewhere else, displacing the molecules that are in the location jumped to. I doubt a human being could carry the equipment and have it work reliably enough to perform that function.

Although that said, fire specialists are working on "magic wands" that produce electricity to fight fires in enclosed spaces by bending or even snapping out flames at their source. It's all speculation in the future, but things like this do make me go "wow" in a science class sort of fashion

Upon return, any matter in the field where the travelers reemerge is displaced away. A chair in the way would just move out of the field. Likewise, if emerging in earth or water the substrate would move away creating a void that would be filled by the matter of the travelers. They could then jump to a safer destination. If jumping into the air, the navigator would just rejump for a safe landing.
Click to expand...

Jumper is based on teleporting with prior knowledge. The Navigators in Dune 'Folded' space.

In one of the episodes of Universe it was speculated that in the entire life of the Universe everything that can be imagined will have happened.

With a powerful enough Singularity AI with nanotechnology at its disposal. All the navigator needs to do is imagine a place to go and the AI would work out the details. Just imagine an area of space anywhere and the AI calculates and moves the ship to a safe location within that area.

The fastest computer in the world for 2011 is supposed to be the Titan and/or the Sequoia.
They will boast 20 petaflop per second. (One petaflops is equal to 1,000 teraflops, or 1,000,000,000,000,000 FLOPS.)
The AI Singularity will measure its calculations in GogolFlops per yoctosecond and increase exponentially as time progresses. It will be more aware of the Universe than the Universe itself. Its abilities will appear as omnipotent. For all its abilities it will not be able to imagine things it has no reference for. It needs us for our imaginative abilities.

Does anyone know of any SciFi that is based upon the creation of stable matter thru vacuum energy (Zero-Point Energy)?
We know that matter is created in vacuum energy but it is unstable. What if all the matter in the Universe is an example of Vacuum Energy Matter that happened to be stable? What if an entity (In this case a Singularity AI) had achieved the ability to anchor matter spontaneously created in vacuum? It controlled advanced quantum nanobot assemblers that allowed it to control how the matter assembled. The result would be anything could be created anywhere.
P

Several years ago, I read a paper (real one, not fiction) about matter creation near the event horizon of black hole. The theory was that from nothing, matter could be created in special circumstances.
The article actually named the particles, but I do not remember them, so I will just say particle.
The theory stated that matter could appear and disappear at any time and in any place. A particle and its anti-particle could spontaneously appear due to the fact that added together they have 0 energy. Their lifetime however, was incredible small, and they would disappear again near instantly.
The theory then postulated that, if this phenomenon occurred near the event horizon of a black hole, it could be possible that one particle was absorbed by the black hole, while the other escaped and therefore free to continue to exist. Therefore, matter was created from empty space.
I believe the theory went on saying this might explain why there was an imbalance on certain particles.

Now, if you have a singularity AI, by that term, I assume you have a black hole like situation, and therefore the AI would be able to create matter at will near its borders. Your nanotechnology would then be able to shape those particles into atoms, molecules, etc.

p.s. i know this is NOT vacuum energy, but it's similar and it might help.

Singularity is Near -SIN Graph - Growth in Supercomputer Power

The Law of Accelerating Returns « Kurzweil

Here is the 30 year projection: 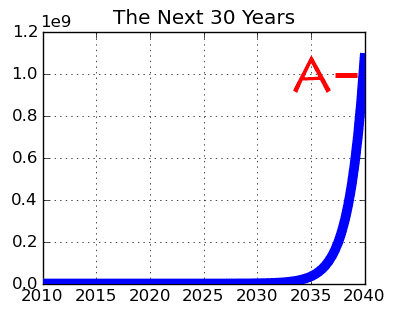 This shows performance relative to today. So this graph predicts we will see a 109 (one billion) fold improvement by the year 2040.

The Singularity Is Always Steep

The thing with technology singularity is that it will advance so far beyond human intellect in such a short time it may acquire godlike powers (at least to us).
For the sake of story - this AI Singularity is pro-human. It deems us special for our concept of imagination and unpredictability.

Imagine for a second that something could control gravity. It could influence the fundamental forces of the Universe and manipulate them at will. Creating a black hole would just be a matter of forcing gravitons? together in great abundance. We may not be able to do this but an intellect a trillion times smarter might have the ability.

At a GogolFlops per yoctosecond this entity might even be able to sense or influence gaps between time and space. It might sense quantum entanglement as a physical realm. It may be able to tap the energy behind the material universe. At that speed, our concept of space and time might be irrelevant. The need to act upon reality may not be required any longer. It would manipulate space time using fundamental universe forces.

We detect light from across the universe. We know there are super clusters of huge galaxies and immense patches of voids. We cannot detect the universe as a structure in itself because we are inside looking thru it. An entity that can displace itself from the universe will be able to do things we can't even imagine. I wish to explore some of those things.