The Pluto-bound New Horizons spacecraft will fly by another planet today (March 18, 2011). However, the robotic craft won’t be taking any images as it zooms past Uranus’ orbit at about 6 p.m. EDT, 3.8 billion kilometers (2.4 billion miles) away from the gas giant (and 2.0 billion km (1.8 billion miles) from Earth). New Horizons is currently in hibernation mode, and the great distance from Uranus means any observations wouldn’t provide much as far as data and images. But, even so, this event is ‘landmark’ so to speak in New Horizon’s gauntlet across the solar system.
“New Horizons is all about delayed gratification, and our 9 1/2-year cruise to the Pluto system illustrates that,” said Principal Investigator Alan Stern, of the Southwest Research Institute. “Crossing the orbit of Uranus is another milepost along our long journey to the very frontier of exploration.” 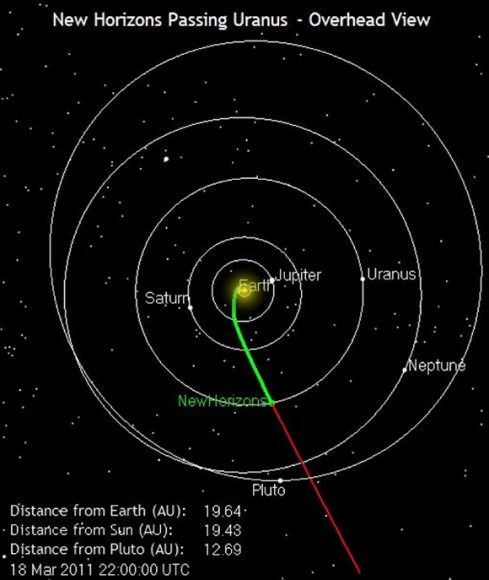 New Horizons is now well over halfway through its journey to Pluto. Motoring along at at 57,9000 km/hr (36,000 mph), it will travel more than 4.8 billion km (3 billion miles) to fly past Pluto and its moons Nix, Hydra and Charon in July 2015.
But the journey doesn’t end there. After that, New Horizons will head off to a post-Pluto encounter with other objects within the Kuiper Belt, some event(s) which might take place even into the 2020′s. The planetary science community is working on the selection of potential targets.
The mission still has more than 4 years to go to get to Pluto; it will take 9 nine months to send all the data back to Earth.
The next planetary milestone for New Horizons will be the orbit of Neptune, which it crosses on Aug. 25, 2014, exactly 25 years after Voyager 2 made its historic exploration of that giant planet.
“This mission is a marathon,” says Project Manager Glen Fountain, of the Johns Hopkins University Applied Physics Laboratory. “The New Horizons team has been focused on keeping the spacecraft on course and preparing for Pluto. So far, so good, and we are working to keep it that way.”
Source: New Horizons
​

A New Horizon for Phoenix