The moon has suddenly acquired its own satellite: a two-mile-across starship that represents a hitherto unsuspected Galactic Commonwealth. The F'thk, a vaguely centaur-like member species for whom Earth's ecology is hospitable, have been sent to evaluate humanity for prospective membership.

The F'thk are overtly friendly but very private—“Information is a trade good.” As Earth's scientists struggle to understand their secretive appraisers, odd inconsistencies emerge. As troubling as those anomalies is the re-emergence of a bit of insanity humanity thought it had outgrown: Cold War and nuclear saber-rattling.

The Galactics' arrival may signify the start of a glorious new era, or it may presage the cataclysmic end of human civilization. Which outcome do the aliens really desire . . .

And what will they do if humanity refuses to play its assigned role? 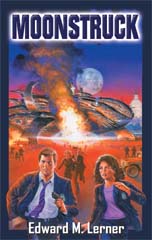 Free Chapters of The Shifters of 2040, Shifter Dystopia