Countdown to May 9th.

Reporters got to see some footage of the main characters and some of the finale footage. Let's see if we can find it posted on the web now....

Lost creator JJ Abrams has unveiled footage from his Star Trek prequel at a press event in London.
The clips featured US actor Chris Pine as the young Captain Kirk, Heroes star Zachary Quinto as Mr Spock and Simon Pegg as Enterprise engineer Scotty.
The audience also saw Leonard Nimoy reprise his role as the older Mr Spock in one of four excerpts from the film.
In his introduction, Abrams said he wanted the film, to be released in May 2009, to feel "legitimate and real".
Speaking at London's Vue West End cinema on Tuesday morning, the film-maker admitted he had "never really been a huge Star Trek fan". 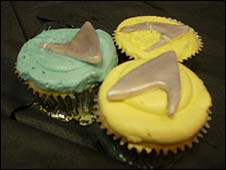 Reporters were treated to cupcakes bearing the Starfleet insignia

"It was always someone else's show," he continued, citing the original TV series' limited resources and "cardboard planets". On reading the script, however, he said he would have been "jealous" had another director taken on the project.
He also praised the contribution of British actor Pegg, who said he was "pant-wettingly excited" to be in attendance.
"I'm a fully paid-up geek," said the Shaun of the Dead star, who said he "couldn't put into words" the thrill he felt appearing in scenes alongside the Spock character.
Warning: if you do not want to know more about the Star Trek film, stop reading now.


The preview began with a screening of the latest trailer, which showed scenes of Kirk and Spock as children and Eric Bana as Romulan villain Nero.
Abrams then introduced the first excerpt, in which "farm boy" Kirk gets into a bar brawl with four Starfleet officers.
Kirk is subsequently seen being smuggled on board the Starship Enterprise on its maiden voyage by doctor Leonard "Bones" McCoy, played by Karl Urban. 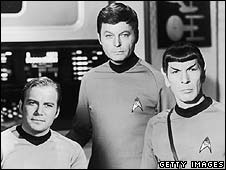 A third scene introduced Pegg's character Montgomery Scott, while a fourth revealed some effects-laden footage from the film's finale. Other familiar characters featured included communications officer Uhura, played by Zoe Saldana; Hikaru Sulu, played by John Cho; and Pavel Chekov, played by Anton Yelchin.
Bruce Greenwood plays Commander Christopher Pike, captain of the Enterprise, who is shown at one point exhorting Kirk to follow his father's example and enlist in Starfleet.
In his scene, meanwhile, Nimoy's Mr Spock is seen delivering the Star Trek legend: "Live long and prosper."
Star Trek is released in the UK and US on 8 May 2009.
Click to expand...