NASA Astronomy Picture Of The Day
NGC 604: X-rays from a Giant Stellar Nursery 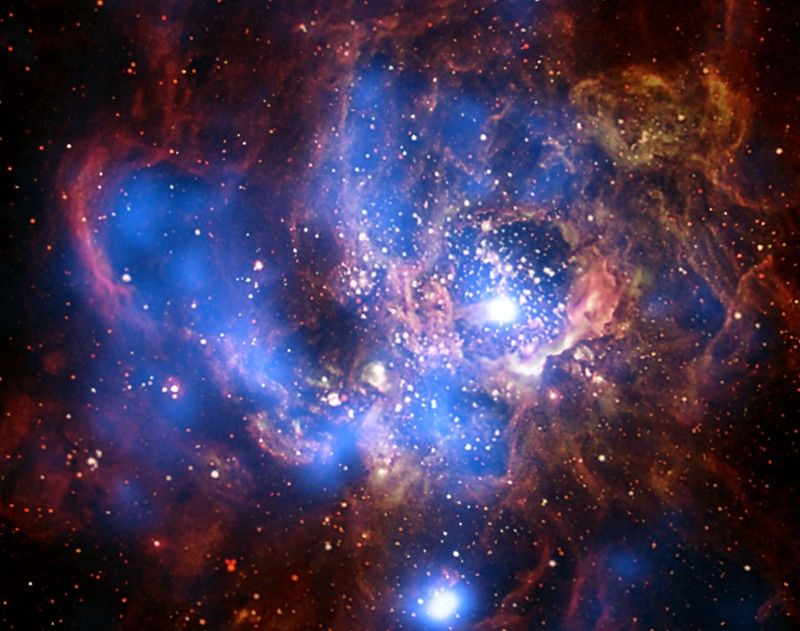 Explanation: Some 3 million light-years distant in nearby spiral galaxy M33, giant stellar nursery NGC 604 is about 1,300 light-years across, or nearly 100 times the size of the Orion Nebula. In fact, among the star forming regions within the Local Group of galaxies, NGC 604 is second in size only to 30 Doradus, also known as the Tarantula Nebula in the Large Magellanic Cloud. This space-age color composite of X-ray data (in blue hues) from the Chandra Observatory, and Hubble optical data shows that NGC 604's cavernous bubbles and cavities are filled with a hot, tenuous, X-ray emitting gas. Intriguingly, NGC 604 itself is divided by a wall of relatively cool gas. On the western (right) side of the nebula, measurements indicate that material is likely heated to X-ray temperatures by the energetic winds from a cluster of about 200 young, massive stars. On the eastern side the X-ray filled cavities seem to be older, suggesting supernova explosions from the end of massive star evolution contribute to their formation.

X-Rays from the Cat's Eye Nebula