Fantasy Once Upon a Time in Wonderland

ABC has a winner on its hands with its fantasy based Once Upon a Time that deals with fairy tale & mythical characters coping with the real world in Storybrooke.

As with most TV shows that are successful an attempt will be made to create a spinoff of it.

Once: Wonderland is set in the pre-curse world of Wonderland. The story of Once: Wonderland will be from the perspective of Alice (Sophie Lowe), a girl who "has a generous heart but carries the scars of a long hard life". Joining Alice will be characters Cyrus (Peter Gadiot), as a mysterious love interest for Alice with a secretive background, and the Knave of Hearts (Michael Socha), a gallant adventurer and 'ladies man'.

Production on the pilot is expected to start on April 7, 2013, immediately following the season ending of Once.

Staff member
Oh, I don't see this ending well. Once Upon a Time is sort of unique in its style and diluting it with a spinoff is either going to take away from the original show or end with the spinoff quietly going away.

It might have worked if the flashbacks from the existing series hadn't been in it, they could have used those as a prequel.. but other than that, I'm not seeing the appeal on this one. It just sounds a bit rubbish

Azhria Lilu said:
It might have worked if the flashbacks from the existing series hadn't been in it, they could have used those as a prequel.. but other than that, I'm not seeing the appeal on this one. It just sounds a bit rubbish
Click to expand...

Exactly! We... uh, I mean people who might be watching it, yeah, that's it, hey see that game on TV last night? ... are already seeing a pre-curse Wonderland because of all the flashbacks that have been used to tell the origins & motives of the characters. The premise of an 'Alice in Wonderland' arc could have very easily have been handled within the existing show.

Staff member
An interesting turn of events... turns out that Once: Wonderland might be a one season story arc consisting of 13 episodes and then future seasons would have different Once Upon a Time spinoff characters & stories, a bit like American Horror Story is a different show each season but with some common elements.

The name "Limited Series" is apparently being used for this type of programming where it is not a full-blown series that is expected to last several seasons nor is it a mini-series that, in the US, typically have about 6 episodes, but is somewhere between.

Staff member
... and the first official promo image has been released along with an official description and a new name. "Once: Wonderland" is now "Once Upon a Time in Wonderland". (I'll update the thread title accordingly.) 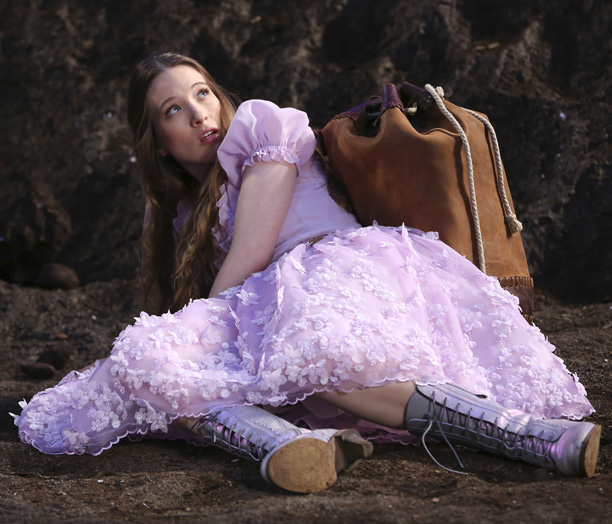 ABC said:
In Victorian England, the young and beautiful Alice (Sophie Lowe) tells a tale of a strange new land that exists on the other side of a rabbit hole. An invisible cat, a hookah smoking caterpillar and playing cards that talk are just some of the fantastic things she’s seen during this impossible adventure. Surely this troubled girl must be insane and her doctors aim to cure her with a treatment that will make her forget everything. Alice seems ready to put it all behind her, especially the painful memory of the genie she fell in love with and lost forever — the handsome and mysterious Cyrus (Peter Gadiot). But deep down Alice knows this world is real and just in the nick of time, the sardonic Knave of Hearts (Michael Socha) and the irrepressible White Rabbit (John Lithgow) arrive to save her from a doomed fate. Together, the trio will take a tumble down the rabbit hole to this Wonderland where nothing is impossible.
Click to expand...

Staff member
The first trailer for Once Upon a Time in Wonderland has been release. It seems to be much darker then the parent and, at least from the mention of pirates & mermads halfway through, it would seem that the spinoff will dovetail into where Once Upon a Time will pick up at when season 3 starts.

I don't understand. With all the characters they pull into Once Upon a Time, why this character? Why this spin off? I will be checking it out though.

Staff member
And it looks like this experiment did not work out too well for ABC.

The Wonderland spin-off has been officially cancelled with all indications so far that, even though it was planned as an anthology series with different characters & story line each season, that no future seasons are planned.

The main show, Once Upon a Time, has not been renewed yet either but likely will be.

I'm just catching up with Once Upon a Time - halfway through second season. Hook is terribly tasty

Azhria Lilu said:
I'm just catching up with Once Upon a Time - halfway through second season. Hook is terribly tasty
Click to expand...

The original Once Upon a Time is a guilty pleasure show for me.

Even though it's not my usual TV fare I think the show is, for the most part, well written with weaving the various characters together into one giant interconnected universe. And I prefer the Evil Queen.

The second season is loads better than the first. I really like the way they're tying the stories together and the fact that no one is entirely evil or entirely good. Instead of people being set bad or set good, and you have to just accept it, they're showing the backstories about why they are taking the path they're on.


Of course.. the guy who plays Hook being hot is a huge bonus too...

Fantasy Once Upon a Time

TV: Once Upon a Time and Game of Thrones