Fantasy Once Upon a Time

What's people's thoughts about this new show on Sunday nights @ 8pm on Channel 5?

I'm loving it so far.

Here's a link to the site:

Once Upon A Time - Channel 5

I've already seen the first seven episodes of this. It's a bit more lighthearted than Grimm (which is just as awesome ) but it's cleverly done - and I really like the flashbacks into fairytale land. Robert Carlyle plays one of those roles that are just so perfect for him.

Okay I've noticed a similarity to how this and "Eureka" started out. Carter decides to stick around even though he could have left at any point. Emma Swan same situation.

Kind of yes and kind of no. If you look at the first episode, she crashes because she thinks she sees a wolf. Basically, she can't leave.

Getting good now. Now we discovered how rumplestiltskin ended up in prison.

I watch it, but on a VCR tape days afterwards because it of a conflict with another show that I watch.

It's coming back for a second season

Writer
TV - Once Upon a Time, Season 1


I've finally reached the end of the 22-episode first season of Once Upon a Time, which I have briefly discussed early in the series (in April and May). To recap: the story begins in the present-day USA when Emma Swan (Jennifer Morrison), a young woman with a talent for finding people, is herself found by her son Henry (Jared S. Gilmore) whom she had given up for adoption ten years previously. She takes him back to his home town, Storybrooke, and immediately find herself in conflict with Regina Mills (Lana Parrilla), the town's mayor and the woman who had adopted Henry.

Henry has a firm belief that Storybrooke is no ordinary town but is populated by people from another time: characters from fairy tales who have been transported to the USA by a spell from an evil queen - who happens to be Regina Mills. Unsurprisingly Emma Swan refuses to believe him but the viewers of the series know better, since running in parallel with the scenes in Storybrooke are those from the land of fairy tales, in which we see the same characters as they used to be. So we know that teacher Mary Margaret Blanchard (Ginnifer Goodwin) is really Snow White - and Emma Swan's mother - and that her husband Prince Charming (Josh Dallas) has become David Nolan, a local handyman who is inconveniently married to someone else.

The core of the plot in Storybrooke is the tussle between Regina and Emma, with Mr Gold, formerly the evil magician Rumpelstiltskin (Robert Carlyle) playing a mysterious game between the two of them. Meanwhile Henry is desperately trying to convince Emma that all is not as it seems, and that only she has the power to break the curse which preserves everyone in Storybrooke, frozen in time, and allows none of them to leave. As I mentioned in my previous comment on this series, there's a faint echo of The Truman Show here, except that in this case it seems that hardly anyone in the town except the mayor is in on the secret - although that is not quite true, as we slowly become to realise.

The programme makers have a wonderful time drawing on a wide range of fairy tales for the scenes set in fairyland, where we are shown a whole series of interlocking events (not always in chronological order) which gradually build up a picture of exactly what led up to the mass transfer to Storybrooke. The contrast between the scenes in Storybrooke and the interleaved ones set in an exotic world of queens and princes, magicians and spells, keeps the series interesting. The downside is that there are many characters (some of which play a major part in just one episode before disappearing) and many story lines, which leads to a certain lack of focus and drift from the main story. Despite this, I thoroughly enjoyed the series which finished on a cliff-hanger of an ending to set it up nicely for the forthcoming second season.

Staff member
Who else is keeping up with Once Upon a Time? The 'magic hunters' along with their mysterious "Home Office" is a twist that I was not expecting the series to take at all.

Staff member
The Season 2 finale just aired in the US last night. Woah, it is starting to get interesting!

I am still surprised a bit that Disney, with their direct input, is allowing the show to take some of their most well known characters into such a dark direction.

Once Upon a Time the series takes place in the fictional seaside town of Storybrooke, Maine, in which the residents are actually characters from various fairy tales and other stories that were transported to the "real world" town and robbed of their original memories by the Evil Queen Regina (Lana Parrilla), using a powerful curse obtained from Rumplestiltskin (Robert Carlyle). The residents of Storybrooke have lived an unchanging existence for 28 years, unaware of their own lack of aging. The town's only hope lies with a bail bonds-woman and bounty hunter named Emma Swan (Jennifer Morrison), the daughter of Snow White (Ginnifer Goodwin) and Prince Charming (Josh Dallas), who was transported from the Enchanted Forest within the fairy tale world as an infant before she could be cursed. As such, she is the only person who can break the curse and restore the characters' lost memories. She is aided by her son, Henry (Jared S. Gilmore), with whom she has recently reunited after giving him up for adoption upon his birth, and his book of fairy tales which holds the key to ending the curse. Henry is also the adopted son of Regina, mayor of Storybrooke, who is actually Henry's step-great-grandmother, providing a source of both conflict and common interest between the two women.

Staff member
Once Upon a Time has been renewed for a fourth season by ABC. No word yet on what direction the new season will take after the current Wizard of Oz themed season ends.

Staff member
A Frozen future for Once Upon a Time? Well, now that was unexpected.


Elsa from Frozen showed up in the season 3 finale. It was a 'blink-and-you-missed-it' scene during the final minute of the two-part episode but the show creators have confirmed that it was indeed Elsa and other characters from Frozen might make an appearance in season 4. I guess I need to watch Frozen now over the Summer break. 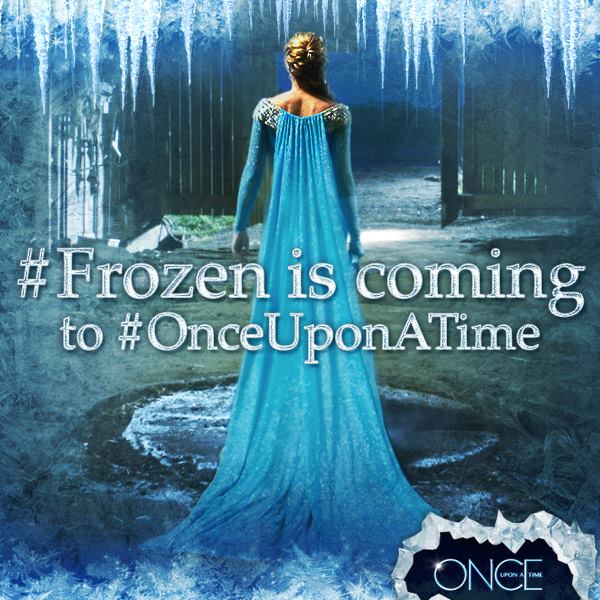 it's a very cool show me and the wife watch it

Staff member
The Frozen story line finished up which I am kind of glad for because, at least to me, it didn't feel like it fit in with the previous seasons and was forcibly shoe-horned in strictly to take advantage of the success of the movie. The Frozen cross-over would've been better served as few episode promotional stunt instead and, if the ratings for the mid-season finale are any indication, other viewers felt the same.

Which, unfortunately, brings me to the new Spring story arc with Maleficent, Ursula, and Cruella de Vil. I hate to say it, but I think we're hitting the point where OUAT is starting to, as the saying goes, jump the shark.

Kevin said:
Which, unfortunately, brings me to the new Spring story arc with Maleficent, Ursula, and Cruella de Vil. I hate to say it, but I think we're hitting the point where OUAT is starting to, as the saying goes, jump the shark.
Click to expand...

I tried watching the first several episodes of the current seasons but I couldn't bear it any longer and stopped recording it on the DVR. Every time the three (Maleficent, Ursula, Cruella de Vil) appeared together onscreen in costume I felt like I was watching a "Disney On Ice" show.

Fantasy Once Upon a Time in Wonderland

TV: Once Upon a Time and Game of Thrones

K
Once a Joss Whedon actor....