Tagline: Sharp as a sword. Sexy as hell.

Plot: The dead have risen to feast on the flesh of the living, and just when it seems that all hope for humanity has been lost, bikini girls with machine guns take one last shot at saving mankind from certain extinction. In the near future, a deranged scientist named Sugita has conducted a series of experiments intended to reanimate the dead. Unfortunately for the entire population of the planet, these experiments were a resounding success. Now, as a massive, shambling army of the undead launches a bloody war against their living counterparts, wandering beauties Aya (Eri Otoguro) and Reiko (Manami Hashimoto) team up to destroy every last zombie in sight. Unfortunately, Aya's sword-wielding schoolgirl sister Saki (Chise Nakamura) is in league with the nefarious Sugita. When Aya discovers that Saki has killed their father, she vows to take brutal revenge against her murderous younger sibling. Meanwhile, the zombie population is growing at an alarming rate. 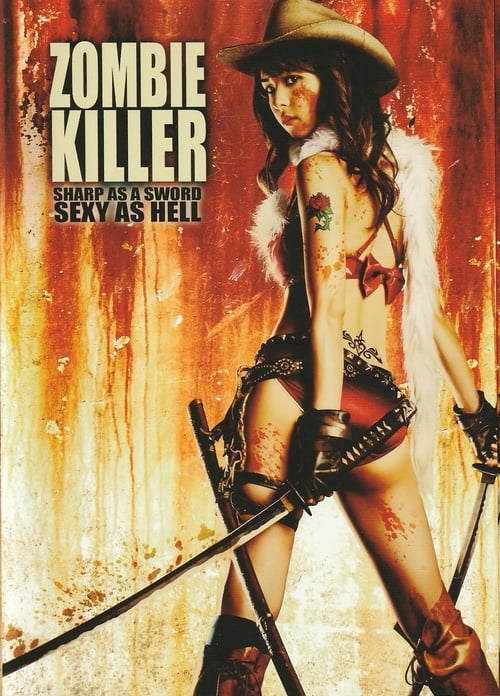 You'd think a movie about a bikini-clad, cowboy-hat-wearing, zombie-killing samurai siren would be fun to watch, but unfortunately that's not the case in “Onechanbara Bikini Samurai Squad the Movie.” Based on PS2 and Wii game series by the same name, Onechanbara attempts to recreate the bloody fun of the games and fails miserably. Literally everything in this movie is CG, and VERY bad CG at that. All the blood effects are computer-generated...poorly.

The film opens with some extras picking off the undead as they lurch toward their little shanty house. Out of the shadows pops our heroine, Aya (Eri Otoguro), who proceeds to slice, dice and dismember each and every creature in the joint. We're given a short back story on Aya and her bumbling over-weight protégé, Katsuji (Tomohiro Waki). We learn Aya's sister is responsible for her father's death, and as a result, is an emotionless killing machine hellbent on killing her sister and exacting revenge.

Aya joins forces with another attractive heroine by the name of Reiko (Manami Hashimoto) out to avenge the “death” of her daughter. If the plot line sounds familiar, that's because it is almost exactly like the recent “Blood the Last Vampire” live-action film. Simply replace all the zombies with vampires, and poof, same flick. I'll briefly mention there is air fighting, teleportation, a double-barreled shotgun with unlimited rounds, and an ACTUAL armpit sword stab (ya, like from high-school Shakespeare plays) in this film.

Comedy Bikini Beach (1964)
Tagline: It's where every torso is more so, and bare-as-you-dare is the rule!
Genre: Comedy, Music, Romance
Director: William Asher
Release: 1964-07-22